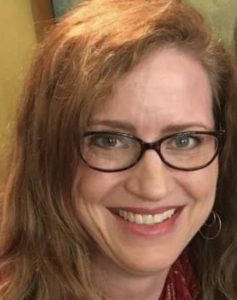 In June, Jane Estes joined the Westover office staff as administrative assistant. Jane was born in Honolulu, Hawaii where her dad served as a pilot in the Air Force. When she was 5, the family moved to Southern California, where her dad graduated from law school a few years later. Jane grew up in the Church of Christ. After earning a social work degree at Harding University in Searcy, she moved to Little Rock, where she received a Masters in Social Work at UALR. Health issues over the last decade have interrupted her career as a mental health therapist, but now she is having some success with new treatments.

Jane volunteers on the boards of several peace and social justice activist/advocacy groups, which include Women’s Actions for New Directions (WAND) and Arkansas Peace Week. She also volunteers with Arkansas Coalition of Peace and Justice (ACPJ).  She has lived with her husband Bob and cats Nani and Maikai, in the same hundred-year-old house for the last 20 years.  Jane and Bob have been visiting Westover Hills Presbyterian Church since 2015. She is excited to serve on the staff at Westover and will work Monday through Thursday from 9am to 2pm.